In 2022, UNESCO was hosted by Sofia Adrados de Pablos and Sophie Demicoli. As a journalist, I got the amazing opportunity to interview them both. With both of them having previous experience in MUN, they were quite excited to be able to host UNESCO. However, this role does not come with little responsibility, and balancing personal life and work is quite a challenge. As time goes by, the wave of difficulties and stress slowly built up.

Being chair of MUN differs completely from the role of a delegates. Instead of speaking, you must listen, and instead of following, you must lead. Overall, the circumstances change completely. When asked about the differences in responsibility, Sofia replied by saying, “As a delegate, knowing what everything is about is the difficult part. I remember it being hard to understand how everything works. As a president, managing all the things, especially meetings, is very overwhelming”.

When asked what one piece of advice they would give to newcomers, a repeated theme was the importance of asking questions. Sophie remarked, “I remember being in that position, and asking questions about the debate in general and about what happens next is important. Even if you ask privately, during the debate, I’ll help.” According to Sofia, knowing what happens and understanding how MUN works changes the experience completely, and instead makes you better involved and interested.

The benefits of participating in MUN

To be in MUN, you must be interested in political and societal issues. However, a main benefit that comes from participating is the improvement of public speaking. Sophie was asked on what benefits she personally received from MUN, “I think it helps immensely, and I can’t express this enough, with public speaking. The fact that you have to stand up and speak to 30 other delegates that you don’t know, it makes a difference”. Learning how to behave in a social group, and to separate your personal self from the country you represent, takes effort, and of course, effort reaps rewards. 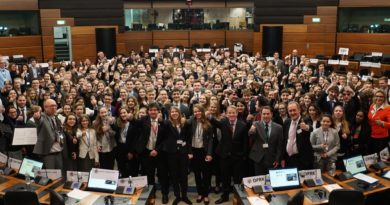